BOTTOM HOLE - LOWER SECTION   All rocks and areas with overhanging bushes provide great cover for the fish. The large rock making the left bank near the dam holds many fish. The quiet water between the last rock and the dam will hold trout. This section can only be fished from the right bank or from the dam. The Club's property ends at the spillway. Do not attempt to fish below the spillway dam or walk across the stream below the dam.

RUN above LITTLE ROCK POOL   A large waterfall from Steve’s pool creates a deep pool and then shallows out to yield several small pockets of water deep enough to hold fish. A dry fly fished among the rocks will attract brown trout.

RUN below the BRIDGE   This run can be fished from either side. If you fish from the left side, you must have waders to get out from under the laurel which enables one to fish the opposite bank and the section just before the dam. You are also very close to the best part of the run where fish come up for a dry fly. This is Ed Onderick’s favorite section of the stream; he has hopes some day of catching a trout in this run.

PAVILION POOL   It should be no surprise to learn that you have to fish from the right bank and cast to the opposite bank and along the rocks and logs that provide a hiding place for the fish. Near the tail end of the pool the fish like to stay in the shade of a hemlock tree. In high water the fish seem to like the near side of the steam.

SWAMP HOLE   To fish this hole you must have hip boots or waders. A fisherman must wade to a sand bar to properly cast under the laurel and under an overhanding tree near the middle of the pool. At times fish will hold near the top where the water is coming from the V-Rock or at the bottom of the hole before flowing into the Big Rock pool. 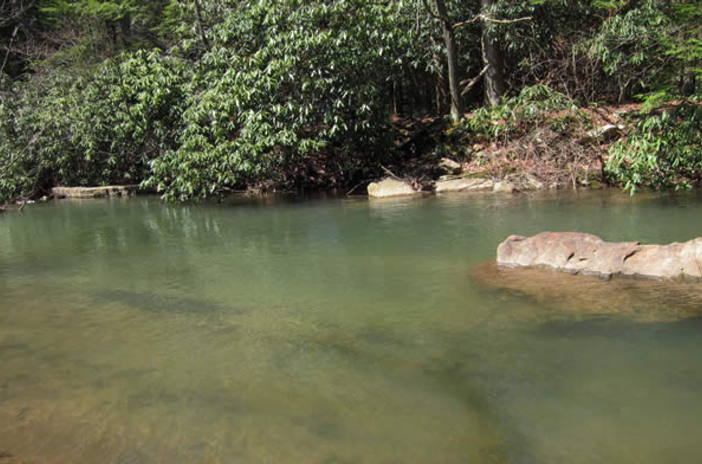 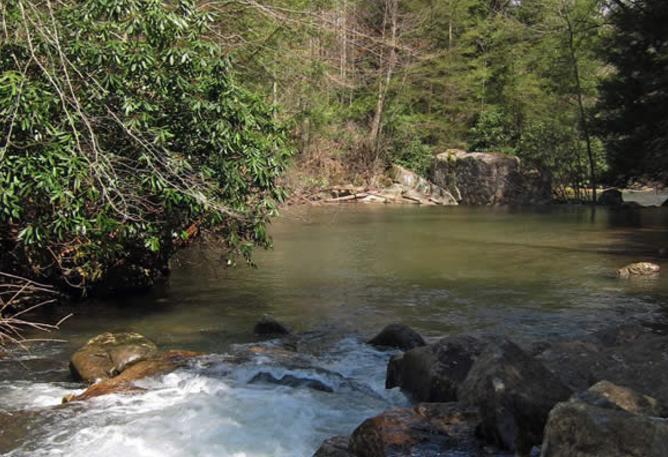 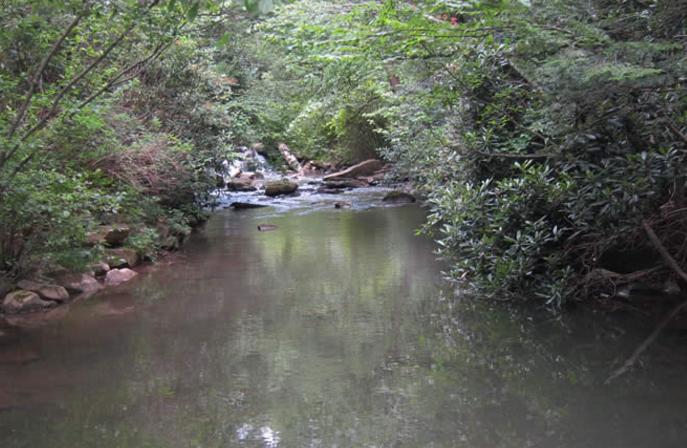 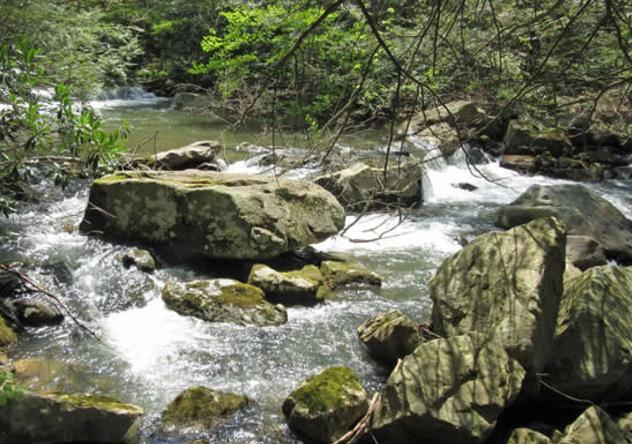 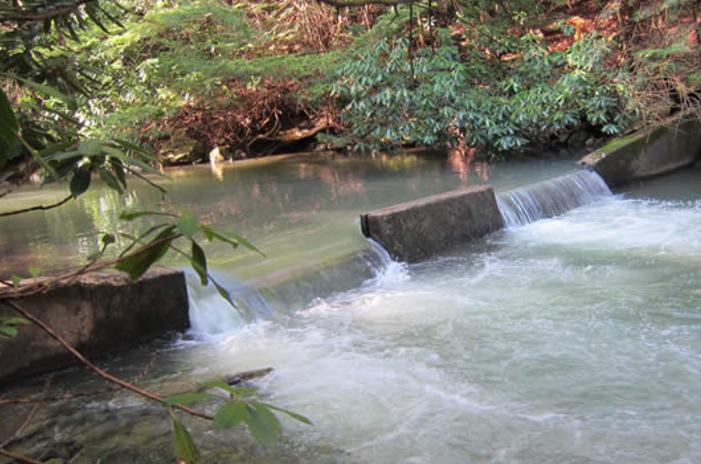 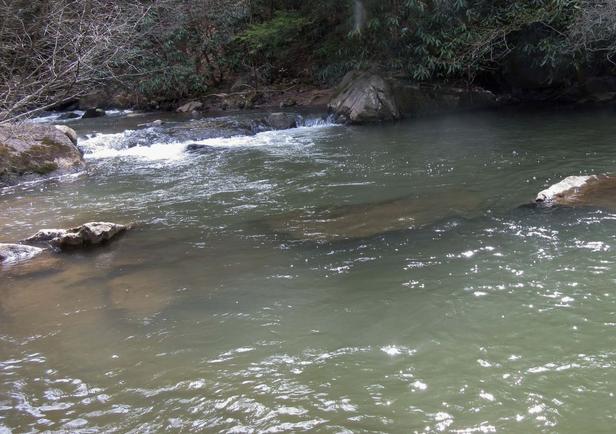 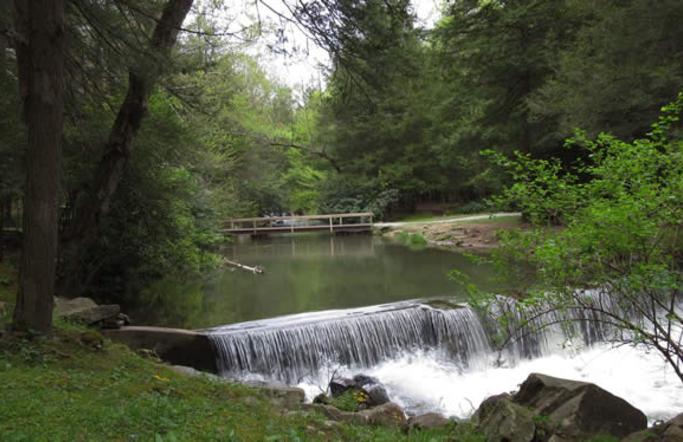 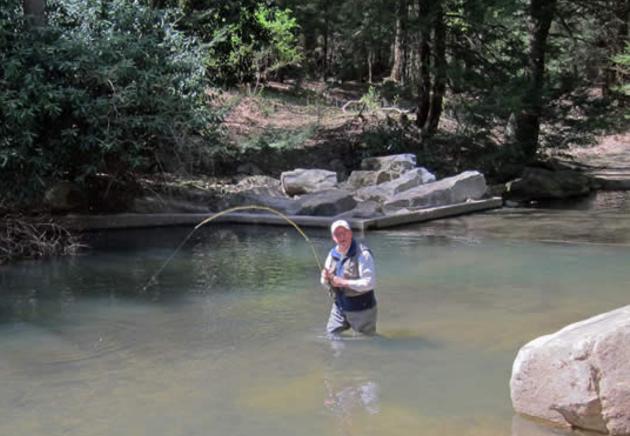 NORTH CAMP    This pool is fished from the right bank and requires casting to the far bank. There is a large submerged log placed alongside the opposite bank at the midpoint of the pool that provides a good hiding place for the trout. Not seen in this photo is a concrete spillway that provides a place for someone in a wheel chair to fish.

RUN ABOVE THE BRIDGE   This section is fished from the right bank and requires casting under the laurel. The water is fairly shallow but has enough rocks to give the fish a good place to hide. Dry fly fishing in this area late in the summer will produce some fish.

UPPER DAMS   Fish will hold near the upper side of the dams and in the fast water under the falls. The second dam has a large submerged rock near the middle of the pool, fish will hold in front, behind and along both sides on the rock. A good cast can put you under the laurel bushes, a bad cast will put you into the laurel. 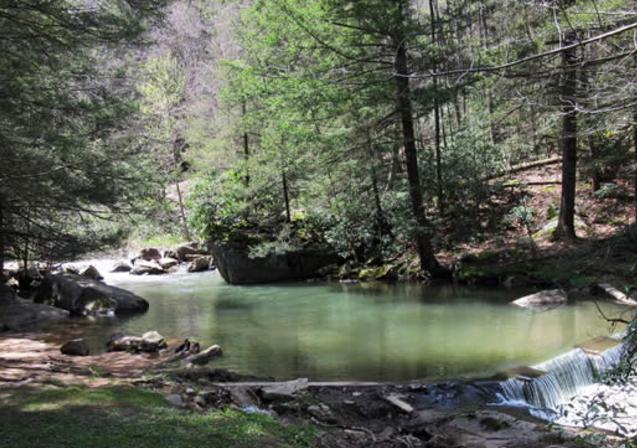 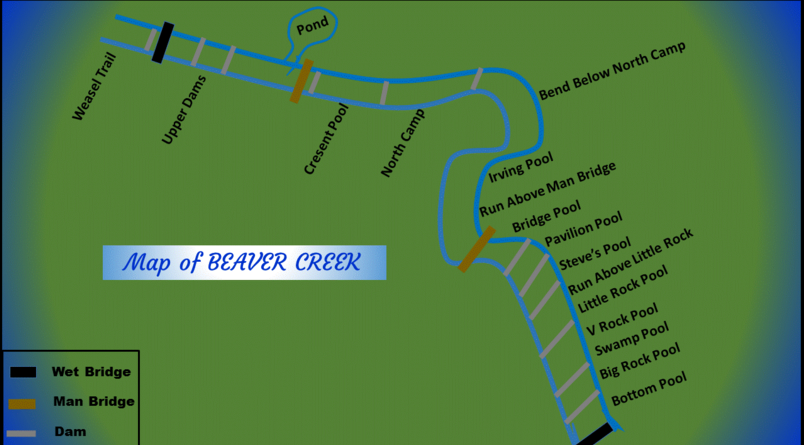 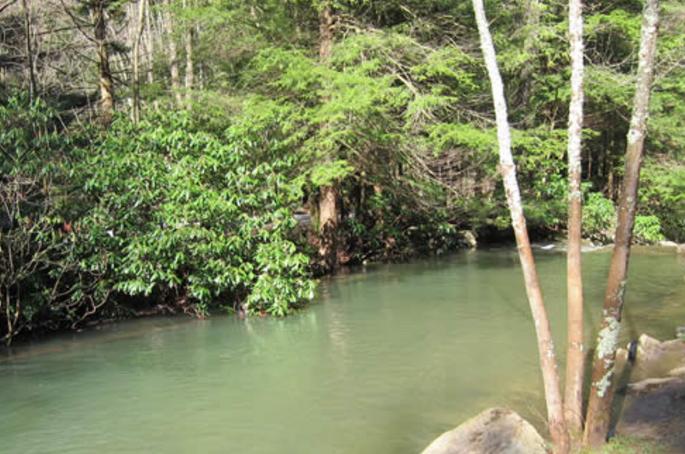 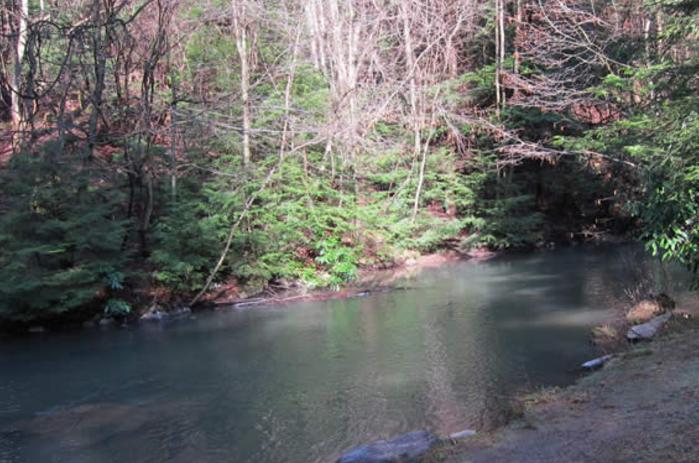 BRIDGE POOL   Most fishermen park their car, rig up and walk to the bridge to check out the stream. If they decide to fish the bridge pool they have many options. Some will cross the bridge and fish under the bridge or the run above the bridge. Others will stay on the left side of the stream and cast alongside the far bank. This pool usually has rising fish causing most fishermen to stop and try their luck. 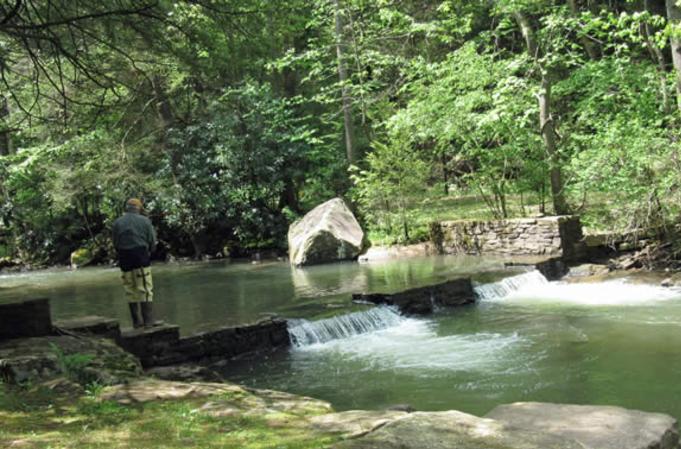 LITTLE ROCK POOL  This pool starts with fast water and gradually gets deeper as it approaches the dam. A nice current runs alongside the rock and is plenty deep to hold the largest trout in this section. There is a small crevice in the rock that often holds trout. Many nymph fisherman wade into the stream and high stick their fly.

STEVE'S POOL  This pool has a wide and consistent bottom providing a fine area for dry fly fishing. The pool was named for Steve Peary who liked to fish his dry flies while sitting on a rock which is now replaced by a bench. Fish can be seen anywhere in this pool. A large rock near the left corner of the dam usually holds the largest fish who can be induced to hit a wooly bugger. 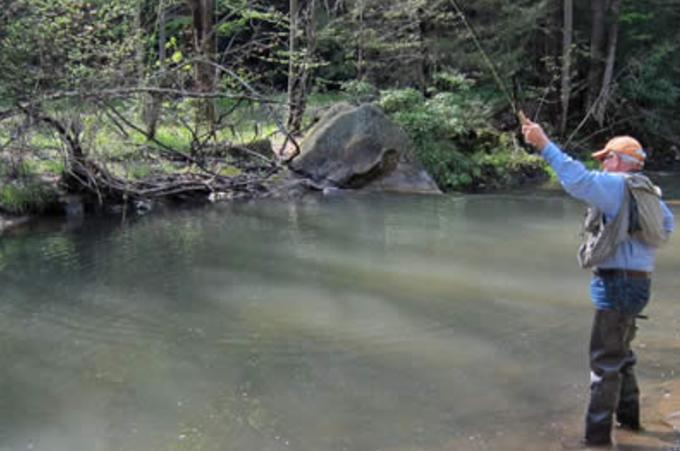 BIG ROCK POOL   This is probably the most picturesque hole on the stream. It usually holds the most fish that can be seen on most days. Any cast alongside the big rock will certainly get the attention of several trout. The partially submerged rock near the dam usually has fish under the rock. Fish also hold above and along the dam.

BOTTOM HOLE - UPPER SECTION   As the water gets into the bottom pool a deep pocket is formed under the water fall that can be fished from below. Nymphs and streamers are very effective in this area. Large rocks and overhanging laurel and hemlocks add some degree of difficulty to your cast.

V-ROCK POOL   This pool begins with the water that comes from the “little rock pool” and has created some deep pockets. This is usually fished from the right bank and a cast alongside the rocks on the opposite bank can also see action. This pool can also be fished downstream from the “Little Rock” dam.

IRVING POOL  This pool is usually reached by walking down stream to the bridge and fishing from the left side on the stream. Fishing from the left and trying to get your fly to the far bank without losing your fly is challenging. Jack Bogut named this pool after he spent an afternoon unsuccessfully trying to catch “Big Irving”.

BEND below NORTH CAMP   The water falls at the start of this pool has attracted our better nymph fishermen. Those fishing with wooly buggers have more success casting across the pool and drifting their fly along the far bank.

WEASEL TRAIL  This pool is usually fished from the left bank and requires casting to the opposite bank and under the overhanging laurel bushes. The run between the protruding rock and the far bank is an excellent place to fish dry flies. In the spring, the upper section of the pool has a very nice run that will hold fish. 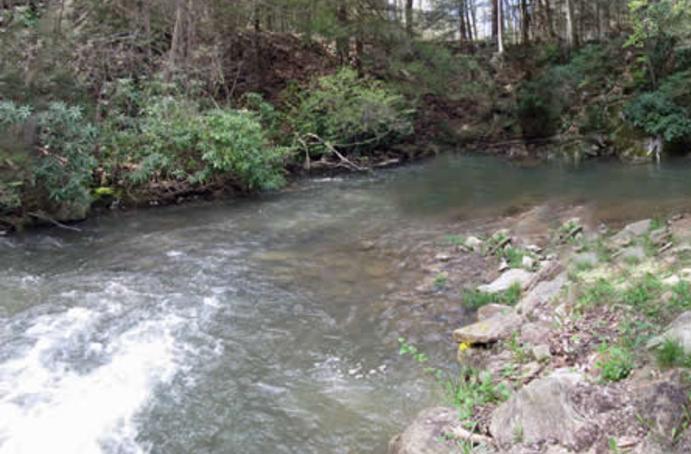 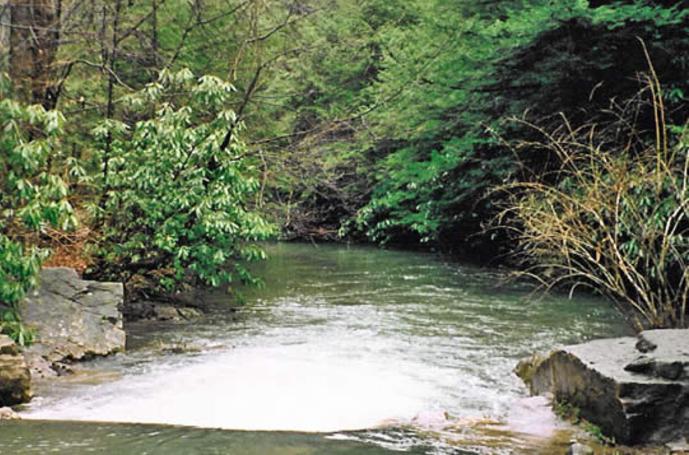 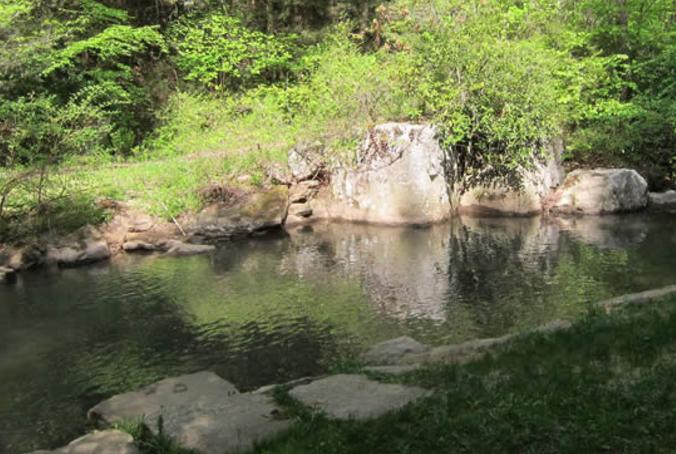 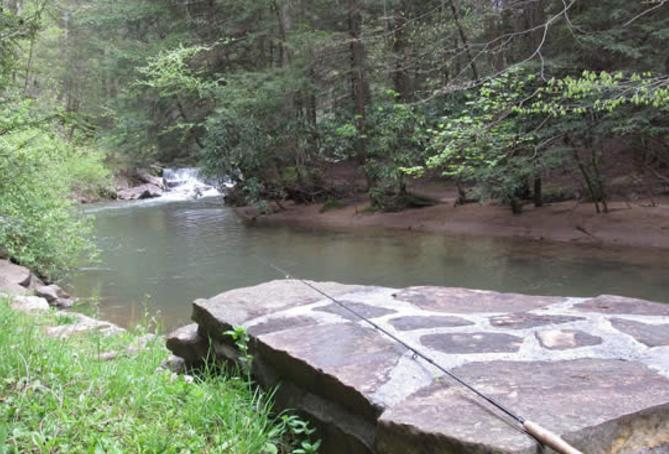 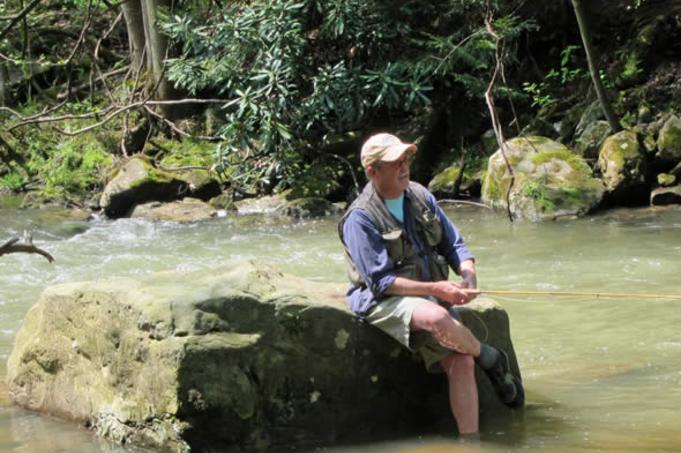 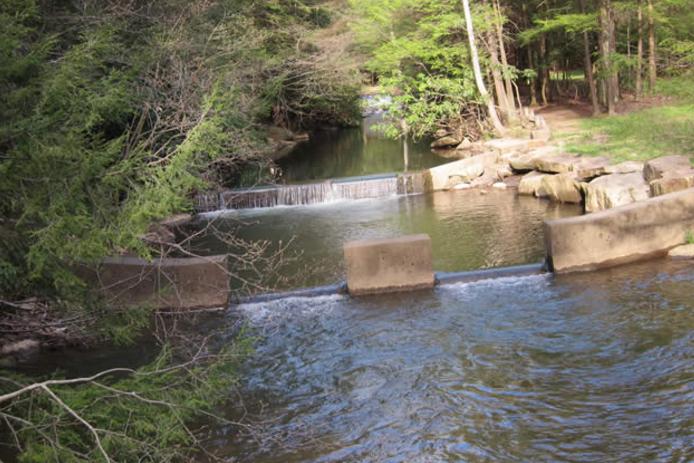 RUN below BIG ROCK POOL   This large section of the stream is mostly pocket water with several places for holding fish. Dry fly fishing in this area can be a lot of fun.

Beaver Creek is classified as a Pennsylvania freestone stream. Streams with that designation typically have the following features: they originate on mountainsides and are fed by seeps, hard rock springs and run off. They often have waterfalls and extensive pocket water in areas with a steep drop, or a classic-pool-and-riffle configuration. Because of low alkalinity they are less fertile and have very few weeds in the stream.

Beaver Creek has its head waters about four miles upstream near Route 40. The Club’s section of Beaver Creek is approximately three quarters (3/4) of a mile long. The elevation drops by fifty-five (55) feet as it passes through our property. We have installed several check dams that allow us to raise the level of water in several pools. The ability to raise the water level increases the area that we can fish and provides cooler water in the summer.

The following series of photos will take you on a trip along the stream, starting at Weasel Trail and following the water flow to the Bottom Hole. Comments about left and right side of the stream would be as you look downstream.